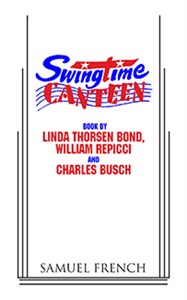 "An evocative balancing act of music and comedy, parody and sentiment. They make the good war sound great."


OVER 300 PERFORMANCES OFF-BROADWAY! It's London, 1944. Join MGM star Marian Ames and her all-girl band from the Hollywood Canteen for the rip-roaringest canteen show of them all.

After 17 years with MGM, still-glamorous movie legend Marian Ames has endured four flop films in a row and is being put out to pasture. But this is 1944 and no time for self-pity. So Marian has gathered up her instrument playing gal pals from the Hollywood Canteen and headed for London to entertain the troops. Joining her are Jo Sterling, (her drum playing stand-in on 17 pictures), her skittish niece Katie Gammersflugel, solid as a rock piano playing riveter Topeka Abotelli and leggy chorine Lilly McBain. Get ready for a memorable night as these five archetypal film characters from the 1940s prove their mettle while they sing over 30 vintage classics from the war years.

Laughs, tears, emotional fireworks, air raids and a celebration of women during the war punctuate this hilarious and heart warming story. Songs include: "Don't Fence Me In," "I'll Be Seeing You," "Sing Sing Sing," "How High the Moon," "I Don't Want to Walk Without You," "A Nightmare Sang in Berkeley Square," "Ac-Cent-Tchu-Ate the Positive," "Sentimental Journey," "Apple Blossom Time," a fast paced, 12-song Andrews Sisters medley and many more.
REVIEWS:

"What a pleasure! A funny parody of backstage Hollywood musicals."

"Swingtime Canteen is an evocative balancing act of music and comedy, parody and sentiment. They make the good war sound great... [There's an] Andrew's Sisters medley that's a wowser. And they escalate into feeling with "I'll Be Seeing You." This gorgeous rendition works as a reminder of what the boys were fighting for, and what any struggle -- war in the '40s, AIDS in the '90s -- means to the combatants: pain and loss, and a sweet, frail hope."

Premiere Production: Swingtime Canteen opened Off-Broadway at the The Blue Angel Theatre in February 1995 and ran for over 300 performances before hitting Atlantic City and London.