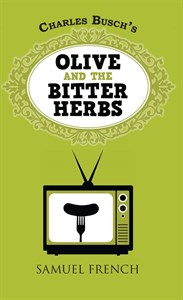 Olive and the Bitter Herbs

"A colorful, sweet-and-sour Busch dish, laced with plenty of laughs."


Olive Fisher is an elderly character actress whose claim to fame were the iconic "Gimme the Sausage" commercials of the 1980s. She is a classic New York curmudgeon, at war with the world and in particular her next door neighbors. Her closed-off life is shaken by the appearance of a spectral male figure viewed through her living room mirror.
A series of strange and outrageous coincidences reveals that the man in the mirror has intimate links to everyone in Olive's world and most revealingly to Olive, encouraging her that it's never too late to change one's life.
REVIEWS:

"Mr. Busch is perhaps equaled only by Paul Rudnick in his ability to churn out well-turned, archly funny zingers..."

"A group of New Yorkers seemingly brought together by chance find that their ties run deeper than they could imagine in Charles Busch's fantastical new comedy Olive and the Bitter Herbs..."

A colorful, sweet-and-sour Busch dish, laced with plenty of laughs.

Premiere Production: Olive and the Bitter Herbs was commissioned by Primary Stages and premiered at 59E59 Street Theatre in New York City in 2011, under the direction of Mark Brokaw.