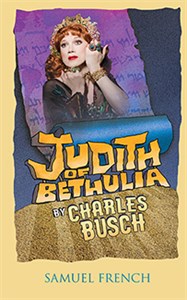 Judith of Bethulia is an outrageous celebration of Hollywood biblical epics such as The Ten Commandments and Samson and Delilah. From the creator of Psycho Beach Party and The Divine Sister.


Imagine the outrageous Mae West in a Cecil B. DeMille biblical epic. Judith, a beautiful, wealthy young widow, is reviled by her own people as a gold digging adventuress. When her ancient city of Bethulia is facing brutal annihilation, Judith, wearing her most glittering finery, slips into the enemy camp, seduces and ultimately decapitates the ruthless General Holofernes. This wild homage to the Hollywood movie epic is the latest trip to the cinematic past by the author of Vampire Lesbians of Sodom and The Divine Sister.

Mr. Busch is a first-class satirist and farceur.

Premiere Production: Judith of Bethulia was first produced by Theater for the New City in their Cino Theater, in New York City on March 30, 2012. It was directed by Carl Andress.