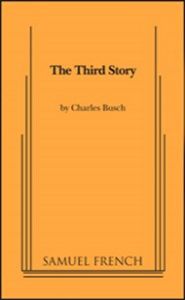 Plays-within-plays require such intricate tailoring. So it's a pleasure to report that The Third Story, the ever-captivating Charles Busch proves equally deft as both performer and seamstress.


A faded screenwriter in the 1940s woos her troubled ex-writer son into collaborating on a screenplay. The gangster/sci-fi B-movie in their imagination unfolds before us, involving a chic crime czarina, a beautiful but icy lady scientist and her failed and understandably bitter human cloning experiment.

A third story is a Russian fairy tale the screenwriter told her son as a child about a painfully shy princess who forges a diabolical pact with a terrifying but surprisingly vulnerable old witch. The fairy tale inspires the movie which inspires the mother and son screenwriters to mend their fractured relationship.
REVIEWS:

Charles Busch says more with a curled lip than many plays say in a whole evening of talk.

Plays-within-plays require such intricate tailoring. So it's a pleasure to report that with The Third Story, the ever-captivating Charles Busch proves equally deft as both performer and seamstress.

Mr. Busch and company explore and explode all sorts of vintage cinema clichés, an activity at which Mr. Busch is without peer

Ingenious! Laugh-packed! The Third Story proves a treat and throbs with heart as well!

Premiere Production: The Third Story had its World Premiere at La Jolla Playhouse in September, 2008. The New York premiere was produced by MCC Theater at The Lucille Lortel Theatre in January, 2009, directed by Carl Andress.