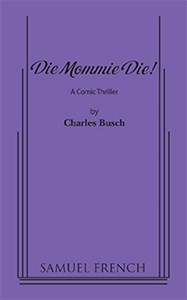 
A comic melodrama that evokes the 1960’s "grande guignol" films that featured aging stars such as Bette Davis, Joan Crawford and Lana Turner.
Ex-pop singer, Angela Andrews, is trapped in a hateful marriage with film producer Sol Sussman. Desperate to find happiness with her younger lover, an out of work TV actor, Tony Parker, Angela murders her husband with the aid of a poisoned suppository.
In a plot that reflects Greek tragedy as well as Hollywood kitsch, Angela’s Elektra-like daughter, Edith, convinces Angela’s emotionally disturbed son, Lance, that they must avenge their father’s death by killing their mother. Lance, demanding proof of Angela’s crime, slips some LSD into her after-dinner coffee. Angela is plunged into a wild acid trip that reveals that not only did she kill the children’s father but also their mother, for she isn’t their mother at all but rather their Aunt Barbara.
A surprising twist ending has all of the Sussman family’s dirty laundry aired out for once and for all. Angela or rather Aunt Barbara realizes that happiness cannot be built upon a foundation of lies and turns herself in to the police.
REVIEWS:

2007 Off-Broadway reviews:“Die Mommie Die!, which runs a peppy 90 minutes, is infused with the good-natured comic brio that has made Mr. Busch a drag artist whom middle America can embrace. Even theatergoers who don’t catch the copious old-movie quotations, verbal and physical, should enjoy Mr. Busch’s hair-trigger comic timing and rubbery mugging, which brings to mind vintage Lucille Ball... [Mr. Busch has] an encyclopedic knowledge of, and bone-deep affinity for, the late-career films of Lana Turner, Joan Crawford, Bette Davis and Susan Hayward, as well as a host of B-picture actresses who rarely surface on Netflix.'

Thanks to Busch's script and exceptional leading perf, the surfaces of this comedy-thriller - about the murderous meltdown of the pre-Nixon Hollywood family - roll back to reveal provocative statements about the power women can lose when a man walks into the room.

Premiere Production: Die, Mommy, Die! was first produced in July, 1999 by Kenneth Elliott and Don Fairbanks at the Coast Playhouse, Los Angeles. It opened Off-Broadway in October, 2007, at New World Stages in New York City, where it was directed by Carl Andress and p