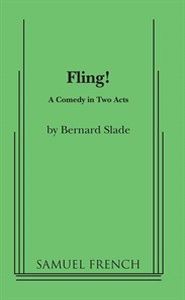 A romantic comedy that takes a light hearted look at sex, love and marriage.

Novelist Michael Stratton and his wife Kate seem to have a marriage embodying the old fashioned virtues of devotion and fidelity, but staying in New York with their old friends Joe and Hilary it comes to light Michael and Hilary once spent the night together. It happened many years ago, but doesn't prevent Kate from going into a jealous rage and exiting stormily. Michael gets drunk and Hilary, feeling if they're to take the blame they may as well play the game, tries to repeat their youthful romantic interlude.
Then Kate, realizing she's blown the "affair" out of proportion, returns to forgive Michael only to find them apparently "at it again." The situation causes Michael and Kate to make a searching examination of their marriage and to wonder whether they've been hypocritical in their outmoded standards of sexual behavior.

In a surprising conclusion, the Strattons learn although they may be sexual dinosaurs it's too late to change and they're stuck with their old fashioned views on marriage, fidelity and each other.