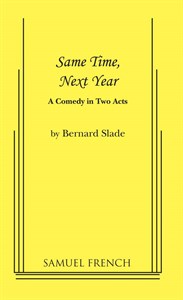 Delicious wit, compassion, a sense of humor and a feel for nostalgia.

One of the most popular romantic comedies of the century, Same Time, Next Year ran four years on Broadway, winning a Tony Award for lead actress Ellen Burstyn, who later recreated her role in the successful motion picture. It remains one of the world's most widely produced plays. The plot follows a love affair between two people, Doris and George, married to others, who rendezvous once a year. Twenty-five years of manners and morals are hilariously and touchingly played out by the lovers.
REVIEWS:

Delicious wit, compassion, a sense of humor and a feel for nostalgia.

Premiere Production: Same Time, Next Year was first presented on Broadway by Morton Gottlieb, Dasha Epstein, and Edward L. Schuman at the Brooks Atkinson Theatre in New York City on March 13, 1975. It was directed by Gene Saks.