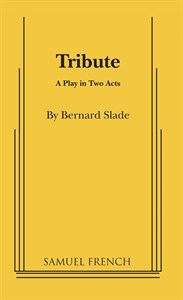 Very funny, and at the same time a touching work.

Slade can blend comedy and pathos skillfully... He can also slice cleanly into truth.

Scottie Templeton's a charming, irresponsible fellow. A sometime Broadway press agent and former scriptwriter, he's everyone's friend, nobody's hero and a great womanizer who's managed to live over fifty years without taking anything seriously including love, marriage and fatherhood. Life's been one continuous gag. But at fifty one, he finds the script's been rewritten as a tragedy: he is fatally ill.

His son Jud, alienated by years of neglect, comes to visit. Scottie's one concern is to make friends with his son, for everyone else adores Scottie including his ex wife, his friend and boss, and his doctor, and after a bitter, revealing confrontation, father and son are reconciled. And it is Jud who gets Scottie to agree to be rehospitalized for treatment and then organizes a giant tribute to his father in a theatre.
REVIEWS:

Very funny, and at the same time a touching work.' - WABC TV'Slade can blend comedy and pathos skillfully.... He can also slice cleanly into truth.