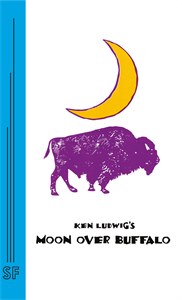 Hilarious... building up its laughs methodically shtick by shtick... Ludwig stuffs his play with comic invention, running gags ... and a neat sense of absurdity... Go and enjoy.


In the madcap comedy tradition of Lend me a Tenor, the hilarious Moon Over Buffalo centers on George and Charlotte Hay, fading stars of the 1950's. At the moment, they’re playing Private Lives and Cyrano De Bergerac in rep in Buffalo, New York with 5 actors. On the brink of a disastrous split-up caused by George’s dalliance with a young ingénue, they receive word that they might just have one last shot at stardom: Frank Capra is coming to town to see their matinee, and if likes what he sees, he might cast them in his movie remake of The Scarlet Pimpernel.
Unfortunately for George and Charlotte, everything that could go wrong does go wrong, abetted by a visit from their daughter’s clueless fiancé and hilarious uncertainty about which play they’re actually performing, caused by Charlotte’s deaf old stage-manager mother who hates every bone in George’s body.
REVIEWS:

Moon Over Buffalo packs more comic genius onto the stage than anything in recent memory!

[R]oles that any actor of a certain age would give his or her soul to play.

The funniest show in New York … The comedy has audiences rolling in the aisles. The second act has a show

[It] doesn't let you stop laughing

Ken Ludwig's Moon Over Buffalo tops the mayhem and pitch

perfect farce of his other hit Lend Me a Teno

Moon Over Buffalo is what a staged comedy should be. It is a wild and wacky farce. It’s “Waiting for Guffman” meets “Noises Off” meets your favorite Shakespeare comedy as performed by the Marx Brothers. Be prepared to leave the theater exhausted from laughter.

Moon is raucous and hilarious!

Ken Ludwig is one of those rare contemporary playwrights who thinks in terms of old-fashioned knockabout farce, and that’s something to be cherished.

Stuffed with comic invention, running gags and a superb sense of absurdity, this is truly a love-letter to live theatre.' - Insidebayarea.com'Moon Over Buffalo will certainly make you laugh!

Moon Over Buffalo is hilarious! Ludwig stuffs his play with comic invention, running gags and neat sense of absurdity. An evening of farcical delight. Go and enjoy!

Somewhere up above, George S. Kaufman, Abe Burrows, Moss Hart and all those clever fellows who wrote the comedies of yesteryear are rolling with laughter, echoing the audience last night at Moon Over Buffalo. The play is nothing less than a love letter to live theater.

Moon Over Buffalo is by far Broadway’s funniest, most enjoyable lighthearted play. Buy a ticket!

Moon Over Buffalo premiered on Broadway at the Martin Beck Theatre on October 1, 1995. It was produced by Elizabeth Williams, Heidi Landesman, DTL Entertainment, Hal Luftig and Jujamcyn Theatres.

The play was subsequently presented in London on October 15, 2001 under the title Over the Moon at The Old Vic by BIll Kenwright.