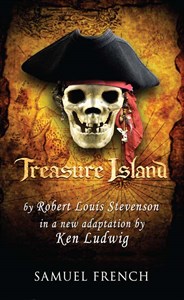 Based on the masterful adventure novel by Robert Louis Stevenson, Treasure Island is a stunning yarn of piracy on the tropical seas.

It begins at an inn on the Devon coast of England in 1775 and quickly becomes an unforgettable tale of treachery and mayhem featuring a host of legendary swashbucklers including the dangerous Billy Bones (played unforgettably in the movies by Lionel Barrymore), the sinister two-timing Israel Hands, the brassy woman pirate Anne Bonney, and the hideous form of evil incarnate, Blind Pew.

At the center of it all are Jim Hawkins, a 14-year-old boy who longs for adventure, and the infamous Long John Silver, who is a complex study of good and evil, perhaps the most famous hero-villain of all time. Silver is an unscrupulous buccaneer-rogue whose greedy quest for gold, coupled with his affection for Jim, cannot help but win the heart of every soul who has ever longed for romance, treasure and adventure.
REVIEWS:

Ludwig invents a new spine to Robert Louis Stevenson's great story of skulduggery and gold-digging on the high seas!

Adapted with savvy showmanship by playwright Ken Ludwig... the show could usefully serve many youngsters as an introduction to the magic of live theater.

A gripping yarn with a genuinely rough-and-ready buccaneering spirit. It flies the flag for good-old fashioned ensemble story-telling.

Premiere Production: The play has its world premiere in May 2007 at the Alley Theatre in a production directed by Gregory Boyd and designed by Eugene Lee and Constance Hoffman.