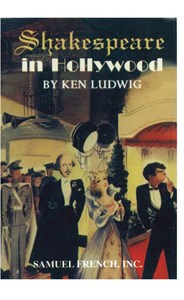 "Will charm your socks off."

It's 1934, and Shakespeare's most famous fairies, Oberon and Puck, have magically materialized on the Warner Bros. Hollywood set of Max Reinhardt's A Midsummer Night's Dream. Instantly smitten by the glitz and glamour of show biz, the two are ushered onto the silver screen to play (who else?) themselves. With a little help from a feisty flower, blonde bombshells, movie moguls, and arrogant "asses" are tossed into loopy love triangles, with raucous results.

The mischievous magic of moviedom sparkles in this hilarious comic romp.
REVIEWS:

Lights, camera, action - there's plenty of it in Ken Ludwig's fantastical farce … Ludwig has constructed an amazingly dense and layered romp [and] clearly had a ball fusing Shakespearean diction with the wisecracking verbal jousting that characterized pre-World War II comedies.

Shakespeare in Hollywood is so deliciously inventive, you'd swear Ludwig and the Bard were in cahoots. At once poignant and funny, literary and farcical, sophisticated and silly, political and fanciful, high-brow and low-brow… a delight!

Shakespeare in Hollywood will charm your socks off. It left me smiling in my Amtrak aisle seat all the way home to New York.

Commissioned by the Royal Shakespeare Company, Shakespeare in Hollywood had its world premier in 2003 at Arena Stage and won the Helen Hayes award for Best New Play of the Year.