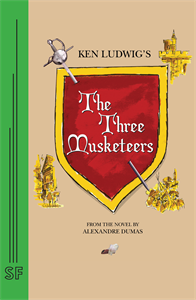 [A] slick, swashbuckling romp that cleverly updates the Dumas novel... Ken Ludwig's new version of the story simply refreshes it, distilling its energy and strengthening its timeless appeal.


This adaptation is based on the timeless swashbuckler by Alexandre Dumas, a tale of heroism, treachery, close escapes and above all, honor.

The story, set in 1625, begins with d'Artagnan who sets off for Paris in search of adventure. Along with d'Artagnan goes Sabine, his sister, the quintessential tomboy. Sent with d'Artagnan to attend a convent school in Paris, she poses as a young man – d'Artagnan's servant – and quickly becomes entangled in her brother's adventures.

Soon after reaching Paris, d'Artagnan encounters the greatest heroes of the day, Athos, Porthos and Aramis, the famous musketeers, and he joins forces with his heroes to defend the honor of the Queen of France. In so doing, he finds himself in opposition to the most dangerous man in Europe, Cardinal Richelieu.

Even more deadly is the infamous Countess de Winter, known as Milady, who will stop at nothing to revenge herself on d'Artagnan – and Sabine – for their meddlesome behavior. Little does Milady know that the young girl she scorns, Sabine, will ultimately save the day.
REVIEWS:

[A] slick, swashbuckling romp that cleverly updates the Dumas novel... Ken Ludwig's new version of the story simply refreshes it, distilling its energy and strengthening its timeless appeal.' –The Guardian'Ludwig tells a pacy tale with a suitable seasonal mix of merriment, musketeering, romance and the most gruesome stage death I've seen this year.' –The Mail On Sunday'Four Stars Out Of Four. The Bristol Old Vic has come up with a real winner for its festive production. Ken Ludwig's adaptation of Alexandre Dumas's classic yarn is completely in keeping with the most popular Hollywood versions.' –The Bristol Evening Post'Four Stars Out Of Four. Bristol Old Vic's spectacular new production certainly lives up to its swashbuckling billing. [It's] a mixture of love, adventure and good old fashioned values ...' –Bristol Metro'Breathtakingly authentic. Just the right seasonal mix of low comedy, stirring music, catchphrases ancient and modern and designs that suggest Hollywood in its heyday.

[A] humorous script, lively characters and plenty of swash-buckling action... the best Christmas show the Old Vic has produced in several years.' - The BBC'Ken Ludwig's script is fairly groaning with giggles. In short, about as much fun as you would expect, and then a little more.

Premiere Production: Ken Ludwig's The Three Musketeers had its world premiere on December 6, 2006 at the world famous Bristol Old Vic, and received ecstatic reviews. The director was Tim Sheader (Twelfth Night in Regent's Park), and the Artistic Director of the theatre was Simon Reade, former Literary Manager of the Royal Shakespeare Company.