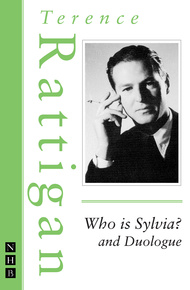 Who is Sylvia? and Duologue

In Who is Sylvia?, which premiered in the West End in 1950, where it ran for over a year, Rattigan seems to be offering a bittersweet portayal of his father - and maybe of his own frustrated love life.

Also included in this volume is Duologue, a play for one actress originally written for television and appearing here for the first time in print. It was broadcast in 1968 and subsequently staged in 1976 in a double bill with The Browning Version.