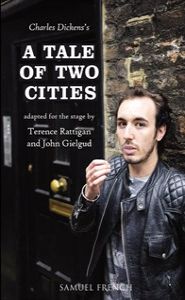 Tale of Two Cities, A (Gielgud/Rattigan)

One of the darkest and most romantic of Dickens' novels, A Tale of Two Cities was adapted for the stage by the dream-team of Terence Rattigan and John Gielgud.

In a time when governments all over the world are facing down political unrest and fierce protests, this revolutionary story has never been more relevant.

This adaptation marries three of the finest artists in their own fields that England has ever known: Dickens the master story-teller, Rattigan the great playwright and Gielgud the mercurial actor.

Gielgud intended to play both Sydney Carton and a number of other roles, and this adaptation reflects that ambition by having thirty characters played by just eight actors.


Premiere Production: This adaptation of A Tale of Two Cities was first performed at the King's Head Theatre on 25th September, 2013.