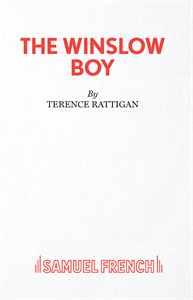 Cadet Ronnie Winslow is expelled from the Royal Naval College accused of stealing.

Cadet Ronnie Winslow is expelled from the Royal Naval College accused of stealing. His father, refusing to believe his guilt and dissatisfied with the manner in which the investigation was conducted, demands a new inquiry. This is refused and Arthur Winslow settles down to fight for his son's honour.

Following an independent inquiry the matter is taken to the House of Commons but Arthur ruins himself financially and in health in the process. But his stubbornness wins, a civil trial is allowed and Ronnie is acquitted.


Premiere Production: The Winslow Boy was first produced at the Theatre Royal, Brighton, on 25th February, 1946, and subsequently at the Lyric Theatre, London, on 23rd May, 1946.