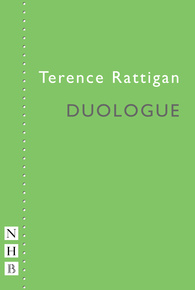 Terence Rattigan's Duologue is a short monologue play for a female actor in which a woman reminisces movingly about her dead husband.


Published in volume Who is Sylvia? and Duologue

Terence Rattigan's Duologue is a short monologue play for a female actor in which a woman reminisces movingly about her dead husband.
The play began life as a piece for television entitled All On Her Own, broadcast on BBC2 on 25 September 1968. It formed part of a series called A Touch of Venus (subtitled: 'Women Alone') comprising short monologues for women written by established playwrights. It was performed by Margaret Leighton and produced by Hal Burton.
It was later performed on stage at the Overground Theatre, Kingston, Surrey, in October 1974, still as All On Her Own. Rattigan then revised the text and retitled it Duologue for a production at the King’s Head Theatre, London, starring Barbara Jefford, in a double bill with The Browning Version, with its first performance on 21 February 1976.
The play is set in a large house in Hampstead, north London. Rosemary Hodge is a widow who returns from a party and, a little drunkenly, starts addressing her dead husband Gregory. Through her reflections and recriminations, she comes to a sad realisation about their relationship, her behaviour, and the nature of his death.
With its intimate, conversational style, Duologue can be seen as a forerunner to Alan Bennett's Talking Heads series twenty years later.