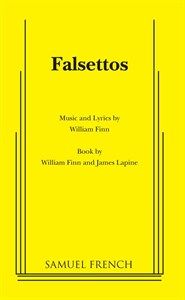 A continuation of the saga of Marvin from March of the Falsettos and In Trousers, this off-Broadway hit finds that archetypal contemporary gay man facing the specter of AIDS.

"A burst of genius."

Falsettoland premiered at Playwrights Horizons, in June of 1990 under the direction of James Lapine.
***March of the Falsettos and Falsettoland become the first and second act (respectively) of the musical Falsettos, which premiered on Broadway in 1992.