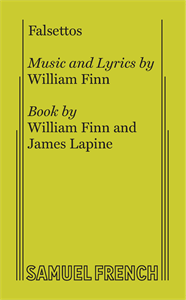 A seamless pairing of March of the Falsettos and Falsettoland, acclaimed off-Broadway musicals written nearly a decade apart, Falsettos won 1992 Tony Awards for Best Book and Musical score. It is the tale of Marvin who leaves his wife and young son to live with another man. His ex-wife marries his psychiatrist, and Marvin ends up alone. Two years later, Marvin is reunited with his lover on the eve of his son's bar mitzvah, just as AIDS is beginning its insidious spread.
REVIEWS:

"A masterly feat of comic storytelling and... visionary musical theater."

"What a treasure this is: brave and hilarious, charming, disarming, loaded with honest sentiment and cynicism."

Please note that the state of music materials for this show may present some challenges. We recommend that you purchase the perusal material (available below) prior to committing to this title in order to ensure that you will feel confident in your organization’s ability to present a quality production.

We are working with the creators of this show to improve the quality of the materials and hope to see them amended in the near future. That said, if you decide you would like to look at other titles, please let us know and we will be happy to suggest alternatives.

Falsettos premiered on Broadway at the John Golden Theatre in 1992, under the direction of James Lapine. March of the Falsettos, Falsettoland and an earlier chapter in the story of Marvin, In Trousers, all premiered separately at Playwrights Horizons off-Broadway.