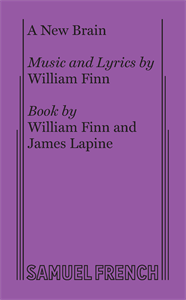 "Jaunty [with] moments of captivating eccentricity."


By the Tony Award-winning authors of Falsettos, here is an energetic, sardonic, often comical musical about a composer during a medical emergency.

Gordon collapses into his lunch and awakes in the hospital, surrounded by his maritime-enthusiast lover, his mother, a co-worker, the doctor, and the nurses. Reluctantly, he had been composing a song for a children's television show that features a frog -- Mr. Bungee -- and the specter of this large green character and the unfinished work haunts him throughout his medical ordeal.

What was thought to be a tumor turns out to be something more operable, and Gordon recovers, grateful for a chance to compose the songs he yearns to produce.
REVIEWS:

"Jaunty [with] moments of captivating eccentricity."

"Filled with beguiling, buoyant melody [and] witty and original lyrics [...] The kind of musical theatre invention we have come to expect from this gifted artist."

Premiere Production: A New Brain premiered at the Lincoln Center Theatre in May of 1998 under the direction of Graciela Daniele.