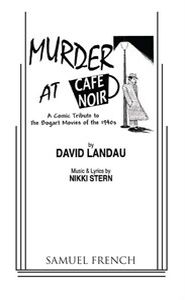 The most popular diner show in the country, Murder at Cafe Noir has enjoyed weekly productions coast to coast since its premiere in 1989.


The most popular mystery diner show in the country, Murder at Cafe Noir has enjoyed weekly productions coast to coast since its premiere in 1989.

This forties detective story come to life features Rick Archer, P.I., out to find a curvaceous runaway on the forgotten island of Mustique, a place stuck in a black and white era. The owner of the Cafe Noir has washed ashore, murdered, and Rick's quarry was the last person seen with him. He employs his hard boiled talents to find the killer. Was it the French madame and club manager, the voodoo priestess, the shyster British attorney, the black marketeer or the femme fatale?

The audience votes twice on what they want Rick to do next and these decisions change the flow of this comic tribute to the Bogart era.
REVIEWS:

"Mystery theatre at its finest."

"A feast for connoisseurs of mystery."

"It's as close as you'll ever get to stepping into Bogey's shows at the Blue Parrot."