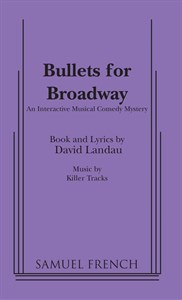 In this sequel to The Altos, Tony & Toffee Alto are back, by popular demand. This time, Toffee wants to be a Broadway star and Tony needs to 'clean' some money. So he hires two producers to mount a hit musical - 'The Mafia Queen.'


A sort of sequel to The Altos, although no knowledge of the first play is required. Gangster Tony Alto & his wife Toffee are back, in a story that answers the question, what would happened if the Sopranos met The Producers.

Toffee wants to be a Broadway star and Tony needs to 'clean' some money. So he has hired two producers to mount a hit musical - 'The Mafia Queen' - starring Toffee. The only catch - the show must be sold out opening night and get great reviews, no matter what it costs - or else! Leave it to Baxter Mallystock and his playwright partner Eli Blain.

You're invited to the party after opening night to revile as the reviews come in, along with the FBI and a few stray bullets.

It's a brand new evening of Mystery, Comedy, Music and great Food which just goes to prove that sometimes when people say they're going to make a hit, they mean it!


Premiere Production: Bullets for Broadway was first presented at the Murder to Go Dinner Theater in Cedar Knolls, New Jersey in March 2002. It was directed by the author.