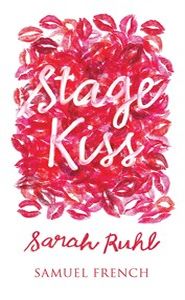 When two actors with a history are thrown together as romantic leads in a forgotten 1930s melodrama, they quickly lose touch with reality as the story onstage follows them offstage.


Art imitates Life. Life imitates Art. When two actors with a history are thrown together as romantic leads in a forgotten 1930s melodrama, they quickly lose touch with reality as the story onstage follows them offstage. Stage Kiss captures Sarah Ruhl's singular voice. It is a charming tale about what happens when lovers share a stage kiss -- or when actors share a real one.
PLEASE NOTE: This show has a mandatory music/media fee of A$20.00 per performance.
REVIEWS:

CRITIC'S PICK! "Suffused with warmth and humor. Sarah Ruhl frothily whips together romantic comedy and backstage farce in this lively comedy about a pair of actors...who find life and art mixing together when they rekindle an old romance during rehearsals for a play."

FOUR STARS. "Sarah Ruhl delivers a brilliant comedy that aims for big laughs and hits its target. Funny: There's nothing like it."

"At once a knowing sendup of the hazy half-truths of stage naturalism and a goofy meditation on the nature of desire and sexual fantasy, [Stage Kiss] manages to be both wholly original and instantly recognizable to the audience. As a satire of theatre and theatricals, it's right up there with Neil Simon's The Sunshine Boys."

"The gorgeously articulate author of The Clean House and Eurydice is in top form with this delightful piece."

Premiere Production: Stage Kiss enjoyed its world premiere at The Goodman Theatre in Chicago, in 2011, before making its New York City debut at Playwrights Horizons in 2014 under the direction of Rebecca Taichman.