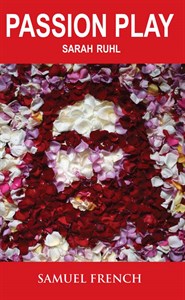 "Her [Ruhl's] unmistakable voice -- poetic and quirky, underpinned with serious feeling and even more serious intelligence -- trumpets forth in brash, impressive form in this ambitious...play."

Hailed by the New Yorker's John Lahr as "extraordinary", "bold", and "inventive", Sarah Ruhl's Passion Play takes us behind the scenes of three communities attempting to stage the death and resurrection of Christ. From Queen Elizabeth's England to Hitler's Germany to Reagan's America, Ruhl's exploration of devotion takes us on a humorous yet unsettling journey filled with lust, whimsy, and a lot of fish.
This intimate epic occurs at the timely intersection of politics and religion. Ruhl dramatizes a community of players rehearsing their annual staging of the Easter Passion in three different eras: 1575 northern England, just before Queen Elizabeth outlaws the ritual; 1934 Oberammergua, Bavaria, as Hitler is rising to power; and Spearfish, South Dakota, from the time of Vietnam through Reagan's presidency. In each period, the players grapple in different ways with the transformative nature of art, and politics are never far in the background, as Queen Elizabeth, Hitler, and Reagan each appear, played by a single commanding actor.
REVIEWS:

Her [Ruhl's] unmistakable voice — poetic and quirky, underpinned with serious feeling and even more serious intelligence — trumpets forth in brash, impressive form in this ambitious and frisky if sometimes unruly play.

Ruhl's voice seems to retreat beyond the sphere of the play, performing that special vanishment that good writers—and good gods—know best how to do....Critic's Pick!

Let's just get the superlatives out of the way. Sarah Ruhl's Passion Play is the most exciting, stimulating, and thrilling piece of theater to hit New York since Angels in America.