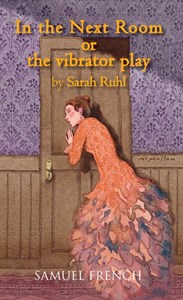 "Insightful, fresh and funny, the play is as rich in thought as it is in feeling...one of the most gifted and adventurous American playwrights to emerge in recent years. In The Next Room is a true novelty: a sex comedy designed not for sniggering teenage boys -- or grown men who wish they were still teenage boys -- but for adults with open hearts and minds."

Sarah Ruhl, whose previous work I execrated, has written a smart, charming, iridescently funny-serious jewel...As Ruhl traces it with wit and insight, and without the slightest prurience, the birth of this new era gives rise to colorful events, astute psychological revelations and endearingly apt dialogue.

If Henrik Ibsen and Oscar Wilde had decided to collaborate on a post-modern drawing-room comedy, the hotsy-totsy twosome surely would have turned out something very much like Sarah Ruhl's genuinely hysterical new work

The playwright mines her subject for suitably bawdy humor without resorting to vulgarity. But what really gives the work its distinction is its sensitive exploration of the physical and emotional repression suffered by the women of the era, which has yet to disappear entirely....The play beautifully balances its humor and pathos.