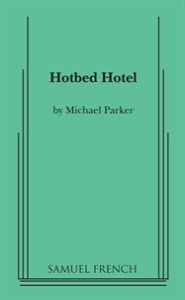 
Terri and Brian Cody are hoping to sell their "One Star Hotel" in the Florida Keys, to the only man who has expressed interest in buying it, a Mr. Sam Lewis from New York. They are not expecting him for a couple of weeks, and are rather caught off-guard when they receive a phone call informing them that he flew into Miami today, is driving down, and will be arriving this afternoon. Unfortunately, they have so few guests they are afraid that Mr. Lewis will see at once, that the hotel is a bad investment. You can see where this is leading... it is a farce after all...

So, in order to bolster Mr. Lewis's interest, Terri and Brian devise a plan the make the hotel appear busier and more prosperous than it actually is. Their staff will masquerade as paying guests, thereby, giving Mr. Lewis the impression that the hotel is overflowing with loyal customers and vacationers. Their plan has one hitch, their entire staff consists of a maintenance man named Hopkins and a sexy housemaid named Maureen. They plan to tell Mr. Lewis that Mrs. Cody is shopping in Miami, while she plays the tole of a wealthy Palm Beach socialite, Mrs. Winthrop-Smythe. Hopkins is the become the Reverend Hopkins, and Maureen is to combine the duties of receptionist, maid and room service. The plot becomes more complicated when the one paying guest they do have, Major Ponsenby, wants to help out. Suddenly, an Arab Sheik, Abdul El Hajj, who bears an uncanny resemblance to the Major, checks into the hotel, stating that he is a potential buyer. Their scatterbrained maid, Maureen, is totally inept at the job she's been asked to do, and can't seem to remain completely clothed for more than five minutes at a time. It turns out Hopkins has a propensity to drink, and has bottles of booze hidden all over the hotel. And finally. the one other guest they have checking in later today, is Hayley Harrington, a predatory nymphomaniac, affectionately known as "The Barracuda."

Into this "Hotbed" of intrigue arrives... Samuel Lewis and his wife (or is she?), Ashley. he is an extremely moral and upstanding businessman and expects nothing less from those around him. She is an extremely attractive woman, and is only interesting in getting Mr. Lewis into bed. Brian spends the rest of the play trying very hard to please Mr. Lewis, keep the Major/Abdul under control, and stay out of the way of "The Barracuda."

How do the Major, Hopkins and Mr. Lewis end up in the same bed? Why is Ashley always losing her clothes? Where do The Barracuda and Abdul fit into all this? Who really is Abdul El Hajj? When does the real Mrs. Lewis arrive? What more could possibly happen?

Much to the horror and chagrin of Mr. Lewis, the real Mrs. Lewis, who can best be described as "a humorless old battle-axe," does show up. In order to hide his relationship with Ashley from her, he bribes Brian with an offer to purchase the hotel, for more than he was asking, only to get another offer from Abdul. But the final twist is yet to come - a show stopping coup-de-theatre, which leaves the audience knowing they've been "had," but not knowing how it was done.
REVIEWS:

"A hilarious comedy that will leave Fawlty Towers looking like a tragedy, Hotbed Hotel is one of Michael Parker's finest pieces of work."

"Hotbed Hotel has the fundamental ingredients of good entertainment that provide frankly unanticipated comedic results. This play will not disappoint you. In fact, it will leave you feeling entertained, amused, and happy you made the trip."

"Hotel, is a hotbed of underhanded intrigue... The comedy delivers seamless dialogue and good timing to make it believable and humorous... Comedic moments that are almost too numerous to keep track of and count."

"A laugh-a-minute merry-go-round that leaves audiences screaming with delight."

Premiere Production: Hotbed Hotel first premiered on October 15, 1992 at the Delray Beach Playhouse. It was the 3rd play written by Michael Parker and has been popular in theaters across America, Canada, England, Wales, Germany, Austria, Australia and New Zealand.