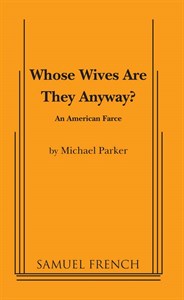 Whose Wives Are They Anyway?


The Ashley Maureen Cosmetics Company has been sold and two of its vice presidents, David McGrachen and John Baker, have planned a weekend off before the new C.E.O. arrives on Monday. With their wives safely off on a shopping spree in New York City, they check into The Oakfield Golf and Country Club intending to "golf their brains out." They unexpectedly encounter their new boss, Ms. Hutchison, and she insists on meeting the wives, commenting blithely "no one who went golfing for a weekend without his wife would ever work for me."

So... David and John have to produce wives. John persuades Tina, the hotel's sexy receptionist, to play the role of his wife, but the only one who can pretend to be David's wife is...JOHN! Inevitably everything goes wrong as John moves in and out of bedrooms, changing from male to female at a frantic pace. Hilarious chaos ensues when the hotel phone system goes on the blink, Tina has too much champagne and can't keep her clothes on, and, yes, the real wives arrive!
REVIEWS:

A farce, with veteran actors,  that had the audience applauding and praising them during the performance and on the way out of the theatre.

An enjoyable evenings entertainment, not too taxing on the brain, but good for many, many laughs.

Premiere Production: Whose Wives Are They Anyway? was first produced at the Delray Beach Playhouse, Delray Beach, Florida on October 1st, 1998.