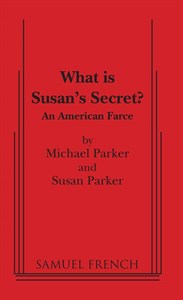 What is Susan's Secret?

"Susan has a secret, and if you want to know what it is, be prepared to sit through two hours of entertainment and continuous laughs before you find out."


The Cider Mill Inn is an old, rustic and somewhat run down country inn owned and operated by an endearing elderly couple, Michael and Susan Edwards. At first they appear to be bordering on senility. We quickly learn however that they are very clever con artists, preying on their unsuspecting guests, by advertising huge discounts to various tradesmen. Using an elaborate check-in form with duplicate copies, guests are, in fact, signing a work contract, requiring them to perform various tasks and improvements at the inn. Over the course of three weekends, plumbers, tile layers, carpenters and electricians are recruited to do work they never expected.

This unique play offers theatres the opportunity for the other twelve characters (Besides Susan and Michael) to be played by either two males and two females, or twelve different actors, or any number in between. The characters vary from the world's most boring man, (his wife says he's had charisma bypass surgery), to a young couple on their honeymoon. Audiences will fall in love with each of these distinctive characters, but especially the loving relationship between the two main characters, Michael and Susan, so touching that this play might be called a love story, if it wasn't first and foremost a farce.

So, what is Susan's secret? On this subject the authors remain silent, preferring instead to let the audience decide on the truth, which of course, in a Parker play, is only revealed in the last few seconds of the show.
REVIEWS:

"The Parker's play is a farce in the tradition of Moliere; looney plots and counter plots cross and collide. A production of Neil Simon's I Ought To Be In Movies, preceded this one, and the Parkers are certainly on Simon's level of wit and delight. Watching this play, you never know how difficult farce is to do well, because you're in stitches. A naughty but hilariously nice evening."

Susan has a secret, and if you want to know what it is, be prepared to sit through two hours of entertainmnet and continuous laughs before you find out.'

Premiere Production: What Is Susan's Secret? was first produced by Rocky and Claudie Varcoe at Class Act Dinner Theatre in Whitby, Ontario, Canada on January 15, 2011.