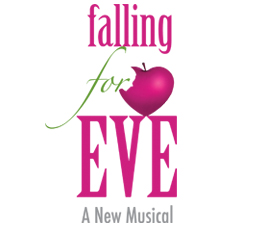 Creation is going exactly according to plan: Eve, curious about what lies beyond the garden, and positively perplexed with the idea of something that’s forbidden, eats the apple.  Then Adam...doesn’t.  Eden, we have a problem. How exactly God is going to get his children together so they can create the human race is anybody’s guess.
At times hilarious, at times poignant, FALLING FOR EVE is an unconventional retelling of the world’s first love story.  Filled with unexpected twists and turns, the first couple doesn’t get to happily ever after until they finally realize that paradise isn’t a place at all.  As Adam ultimately tells Eve, “Paradise is You.”


Scene 1: God (He) celebrates creating the world but then realizes the world is still missing something.  To finish up creation, he then creates Adam, an “angel of the earth,” and gives him Eden, a paradise, to call home.  Adam calls God back and tells her that paradise is just a bit “boring.”  God (She) realizes her mistake and creates Eve to keep Adam company.  As she leaves, God (She) is so touched by their beauty and sweetness that she gives them a gift: the capacity to love, through which they will create all the rest of the angels of the earth.  However, God realizes that her plans are dead in their tracks when Adam’s and Eve’s first kiss is way too innocent to lead to procreation.

Scene 2: Night in the Garden of Eden.  When a sparrow flies out past the borders, Eve asks God what’s beyond Eden, a question that troubles God.  He realizes that Adam and Eve are “only human” and gives Adam and Eve a second gift: choice - and puts the Tree of Knowledge of Good and Evil in the garden.  Eve and then Adam obsess over the new tree.  Why would God put a tree in their midst and tell them not to eat the fruit? He sends Michael and Sarah back to Adam and Eve to tempt them further, telling them to “act like a bit of snake.”  Michael and Sarah tempt Adam and Eve and Eve, getting caught up in the moment, bites the apple.  Then Adam...doesn’t. God (She) realizes she has to be true to her word and casts Eve out of the paradise, leaving Adam alone in Eden.

Scene 3:  Eve, finding herself alone in the brutal world of mortality, cuts her hand on a jagged rock and sees, for the first time, blood drip from the wound.  She realizes she is no longer of the heavens, but of the earth.

Scene 4:  In the heavens, Sarah and Michael are dumbfounded. In response, God (She) goes to Adam and tells him that because Eve is mortal, she will feel the pain of loneliness more profoundly and will soon return.

Scene 5:  Curious, Sarah returns to Earth and finds Eve.  She asks Eve about what it was like to bite the apple, but all Eve wants is to see Adam again.  Eve asks Sarah for help, but Sarah refuses, saying they’re not allowed.  Eve tells Sarah she’ll describe what the apple tasted like if she’ll help her.  Sarah takes Eve to a place where can see Adam, but can’t speak to him.  God (She) appears and breaks up the meeting.  She tries to cheer up Adam, telling him that once things are sorted out, the world will get back on track.

Scene 6:  Eve begins to explore the wonders of the world and she begins to realize that perhaps Eden isn’t paradise after all; perhaps this world is.

Scene 7:  In the heavens, Michael and Sarah point out to God that it’s been twenty-one years since Eve left, and she’s becoming less interested in coming back to Eden.  At his wits end, God goes Adam with a plan to fix things: he’ll make Adam a new woman to take Eve’s place. At first, Adam’s thrilled with the idea, but as he describes exactly what he wants, it becomes clear that no other woman can take the place of Eve.

Scene 8:  God, fed up with the whole problem, ponders the possibility of just destroying them...then, seeing Eve in pain, decides against it and goes to her. God tells Eve if she’ll repent, she’ll let Eve back into the garden.  Eve tells God she’s sorry, and God lets her return to Eden.  Eve joyously rejoins Adam in the garden.  At first they’re thrilled to be together again, but when Eve asks Adam to kiss her, the distance between them becomes apparent.  Eve needs the passion of an earthly love, something Adam still doesn’t understand. Eve realizes she can no longer stay in Eden and leaves.

Adam angrily calls for God, who, despite the urging of Michael and Sarah, refuses to answer him.  Finally, Michael and Sarah have had enough, they go to Adam and tell him, “Adam, you’ve got to bite the apple so the human race can start.”  Adam finally realizes he needs Eve more than obeying God and more than the safety of the garden and bites the apple.  He immediately feels the weight of mortality and the heartache of missing Eve for twenty-one years. Overcome, he rushes to find her.  When he does, Eve tells Adam, “Oh, Adam, I’ve figured out that paradise isn’t in Eden.  Paradise is out here in the world.”

Adam answers, “No Eve, you’re wrong,” and as the lights dim on the worlds’ first two lovers, he sings, “Paradise is you.”

ADAM: The first guy. As young as possible (late teens, early twenties.) Very attractive.
EVE: The first girl. Also as young as possible, but able to gracefully and believably age to about forty through the course of the play. Also beautiful.
GOD/HE: A young man.
GOD/SHE: A young woman (preferably a different ethnicity than the actor playing GOD/HE).
SARAH: An angel. Young woman.
MICHAEL: Another angel. As young as the others.


NOTE: While the show works very well vocally with the six vocalists described above, should the producers desire, the addition of an "angel chorus" to back up vocals and facilitate the production is also a possibility, and can offer additional performance opportunities and a bigger, more "celestial" sound.