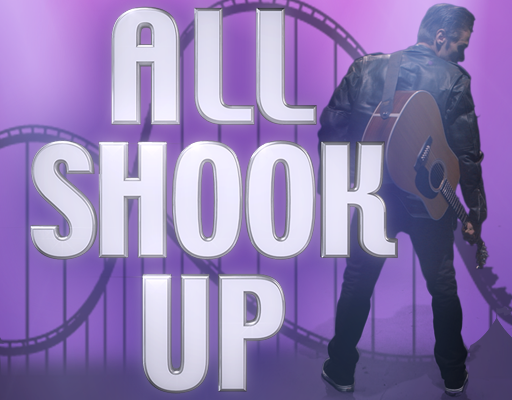 Inspired by and featuring the songs of Elvis Presley.
It's 1955, and into a square little town in a square little state rides a guitar-playing roustabout who changes everything and everyone he meets in this hip-swiveling, lip-curling musical fantasy that'll have you jumpin' out of your blue suede shoes with such classics as "Heartbreak Hotel," "Jailhouse Rock," and "Don't Be Cruel."


ACT ONE - Somewhere in the midwest in the 1950's, Chad, a hip-swiveling, guitar-playing roustabout is being released from prison (Jailhouse Rock).

In a nearby dreary little town, Natalie, a young mechanic, is dreaming of love and adventure. Natalie's widowed father Jim enters and joins in, until the roar of a motorcycle interrupts them: it is Chad, riding into town. Chad is in need of a mechanic and he's introduced to Natalie, who is instantly smitten (One Night With You) and promises to fix his bike.

Chad asks about any excitement in town, but he's told that excitement is outlawed under the Mayor's strict rules: no loud music, no indecent behavior. Chad, incensed, promises to breathe some life into this sad, little town and he touches a broken-down jukebox, and it immediately comes to life (C'mon Everybody). Mayor Matilda enters with Earl, the sheriff, and her son, Dean. Matilda scolds the citizens for dancing and singing, and then goes off to find the root of this newfound evil. Dean meets Lorraine, Sylvia's pretty African-American daughter, and the two share a nervous and flirtatious smile.

Natalie, in an attempt to look more girly, puts on the only dress she owns—a tattered old one she uses to clean car engines. Dennis runs into Natalie and he is about to tell her how he feels for her, when Chad enters and interrupts. Ignoring Natalie, Chad asks Dennis to become his sidekick and the overjoyed Dennis accepts. Suddenly, the beautiful and glamorous Sandra appears, and Chad is struck down with a case of hardcore love (One Night With You—reprise). Sandra is the owner of the local museum. Chad tries to smooth-talk her, but she resists (Teddy Bear/Hound Dog).

Later that day, at Sylvia's Honky Tonk, Natalie enters in her greasy dress, and Lorraine has her change into one of her dresses—it is clean and cute and Natalie looks lovely. She rushes off in pursuit of Chad. Both Sylvia and Jim agree that at a certain point in life, it's better to be alone, when Sandra enters and Jim instantly falls for her (One Night With You—reprise).
Dean enters to tell Lorraine that he thinks she's beautiful. Sylvia interrupts and insists that it's NOT all right for them to be together, and Dean rushes out. Dean meets Matilda at the bus stop, and she tells him that she's sending him back to military school on the next bus. Lorraine enters, and Dean tells her the terrible news—they're about to be separated. Hopelessly in love, Dean and Lorraine decide to run off together (It's Now Or Never).
Dennis meets Natalie on the street and shows off his new hunting cap, which makes him feel like "one of the guys." Natalie has a sudden inspiration and she grabs Dennis' hunting cap. As Chad bemoans Sandra's lack of attraction to him, Dennis comes up with an idea. He volunteers to take her a Shakespearean sonnet. Desperate, Chad agrees. But before Dennis leaves, a leather-jacked roustabout rides into town. It is Natalie, dressed as a fellah named Ed. Chad is excited by Ed's coolness and manliness and he asks Ed to be his new sidekick. Heartbroken, Dennis exits. Chad instructs Ed that his first job as his new sidekick is to give the sonnet to Miss Sandra. Jim enters, and Ed grabs the sonnet and rushes off.
Jim tells Chad that he's in love with a woman who doesn't love him back. Ed arrives at the museum and gives Sandra the sonnet. Sandra is so moved by the sonnet that she finds herself drawn to this strange-looking young man (One Night With You—reprise). As the sun goes down, Mayor Matilda is cracking down on the perceived immoral behavior that is now running rampant through the town. She comes upon a necking couple, and she's stunned to see that it's her precious Dean kissing Lorraine. Matilda promises to throw Chad in jail for what he has done. Ed tells Chad that in order to avoid jail, he should hide in the abandoned fairgrounds just outside of town. Jim, now dressed like Chad, enters and asks Sylvia if she's seen Sandra. Sylvia tells Jim that he's crazy to fall for a woman like that, and Jim admonishes Sylvia for having grown cold and bitter. Jim gives Sylvia a very surprising kiss, and a stunned Sylvia suddenly falls for him. Soon, everyone in town find themselves escaping to the fairgrounds, searching for someone to love (Can't Help Falling In Love).

ACT TWO - In the midst of the abandoned fairgrounds, the citizens of the town are restless and randy (All Shook Up). Dennis comes upon Natalie, who's still dressed as Ed, and Dennis reveals that he's upset about the way Chad treats her (It Hurts Me). Natalie insists that Chad is the only guy for her.
In an attempt to win Chad, Natalie gets an idea—she convinces Chad to teach her (i.e. Ed) how to seduce a woman (A Little Less Conversation) but in the process, Ed winds up kissing Chad. Chad is stunned and Ed runs off as Jim enters. Chad reaffirms his machismo (Power Of My Love) when Jim and Chad suddenly realize they are both in love with the same woman. Sandra enters, lustfully looking for Ed. Jim confesses his love for Sandra, but she doesn't even remember meeting him. As the heartbroken Jim slinks off, Ed enters, and he insists that Sandra leave them alone. Sandra, still hot for Ed, relents and promises to find him later. Left alone, Chad is about to hit Ed, but he realizes that he can't. Ed gives Chad some "alone time", and Chad realizes that he has feelings for his new sidekick (I Don't Want To).
In another part of the fairgrounds, Mayor Matilda enters, followed, as always, by the silent Sheriff Earl, and she vows to bring the roustabout down (Devil In Disguise).
A heartbroken Jim wanders about and runs into Sylvia, who is wearing her best Sunday dress. He wonders what she's doing out there this time of night, and she confesses her newfound feelings for him (There's Always Me). Jim can't handle this revelation, and he rushes off.
In another part of the grounds, Dean and Lorraine plan to catch the morning train out of town, but Chad convinces them to stay and fight for their love (If I Can Dream).
In the center of the fairgrounds, Matilda gathers the townspeople together to form a pious posse to both find her son and arrest Chad. But Chad enters, as does Dean and Lorraine—and the final confrontation begins…
Will true love prevail? (Fools Fall In Love) Will the power of music win the day? Will this small town in the Midwest survive getting all shook up? These questions and more are answered as the characters come together for the finale (Burning Love).