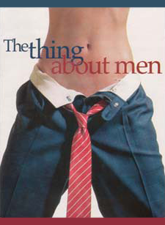 The Thing About Men

Tom is cheating on his wife Lucy (with several women). Lucy is cheating on her husband Tom (with Sebastian). Tom moves out on Lucy and, in disguise, moves in with Sebastian. These are the circumstances that set the mood of hilarious intrigue in this often moving but always light hearted musical about men.
REVIEWS:

"THE THING ABOUT MEN could quite possibly be just what you're waiting for....  [R]obust enough musically, comedically, and dramatically to take the sting out of late summer malaise, and keep you grinning straight into the fall.  It's a cheerful but sobering reminder not only of life, love, and friendship but what can - and must - be done to maintain them and keep them all in top working order."

"Well staged, with great sets, costumes and props, this show also features superb arrangement and accompaniment by Musical Director Sophie Thomas and fellow pianist, Cameron Thomas. Likewise, Director Aaron Joyner has a handle on just how to bring out the show's quirky comic edge and his inventive subversion of the musical form pays dividends all the way through."

"Musicals as fresh and cleverly written as THE THING ABOUT MEN are few and far between making the Australian premiere well worth a ticket."

"This production by Melbourne-based company Magnormos has a lot going for it, with a strong central performance by Parker. He stamps his authority on Tom from the outset, managing to communicate his driving ambition and insensitivity yet still reveal his deep-seated insecurity and vulnerability."

"A serious musical comedy, aimed squarely at adults, and brimming with the wry sophistication of a show that knows it can succeed while taking the high road.”

"There's a Sondheimian hue to one of the best numbers, the second-act "Me, Too": a paean to dating rituals and the thrill of the first kiss.”

"A quirky, clever musical about infidelity and male friendship and the unusual bisection of the two as a cuckolded husband (who was philandering himself) bonds with his wife's new lover."

"The book and lyrics by DiPietro are very funny and the music by Mr. Roberts is quite appealing. THE THING ABOUT MEN makes a great "date musical" if such a thing exists. I guarantee you will be laughing the whole way through."

Premiere Production: In 2003 The Thing About Men opened off-Broadway at the Promenade Theatre where it ran for over 200 performances.