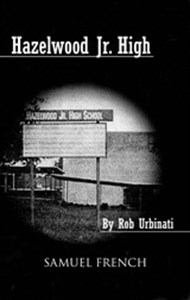 At first, Hazelwood Jr. High is like any other middle school – cliques and crushes, dances and detention.


At first, Hazelwood Jr. High is like any other middle school – cliques and crushes, dances and detention. But when a new girl unwittingly steps into a "love triangle," a revenge plot is hatched, and events spin out of control, escalating into a shocking and unimaginable climax.

Based on a true story.
REVIEWS:

In this fierce, disturbing lament for the death of childhood, the characters hardly change' - but the audience does. Six junior high school kids remain, through terrible events, suspended in a moral vacuum. We, however, move from open laughter to uncomfortable giggling to deep, dark silence. Though the play retains a deadpan documentary feel, withholding judgments and explanations until near the end, it is very much a dramatic artifice. Urbinati immerses us in the girls' world. He sweeps us into the warped logic by which a lunchroom tiff escalates into a dreadful crime, and this logic is stitched into dialogue where perspective and proportion are scarily absent. Urbinati creates a mental jungle in which vampires and cuddly toys, Pentecostal visions and Kmart are tangled together. Slowly, these juxtapositions lose their humor and become an angry, insistent protest at the failure of the adult world to provide these kids with a way through. This is deft and morally serious writing, never exploitative and ultimately full of pity. Everywhere, there is the kind of precision and care that such a subject demands.

Mr. Urbinati's script is based on court testimony and psychological and police reports. Even in the era of Jeffrey Dahlmer and Susan Smith, the story holds its own grotesquerie; you can see why Mr. Urbinati was hooked by it. It takes the absolutely ordinary subject of teenage rivalry and revenge pranks, gives it an exotic lesbian twist and then pushes it to the outer limits of sociopathic behavior. Mr. Elliott, Mr. Urbinati and the cast do nicely in conveying the solemn earnestness of young love and social warfare.

Hazelwood Jr. High is a blistering piece of drama that's conceived and presented in cinematic terms. Its multiple scenes and locations flow into each other without a break, building a considerable I can't believe I'm watching this steam as Urbinati's story veers from puppydog lesbian romance toward brutal slaughter. The horror of it all is seriocomically underscored by the typical banalities of teen existence while songs by Mariah Carey and 1990's girl groups pulse through the air. If you go, better hang on tight -- it's a wicked midnight ride with the rising generation, and definitely not a show for the squeamish.

Mr. Urbinati has written this in a combination of documentary and dramatic style, effectively capturing the banality, the provincialism and the simple mindedness of the girls and their cruelty. While he makes some gestures in the direction of psychological explanation, the overall effect -- undoubtedly intentional -- is the frightful ordinariness of these teenagers. Even as they stumble toward savagery, they play their boom boxes, eat at McDonald's, hang out at the mall and gossip about social life.