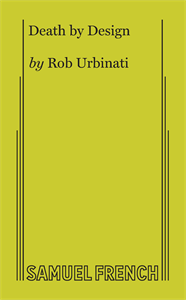 What happens when you mix the brilliant wit of Noël Coward with the intricate plotting of Agatha Christie?


What happens when you mix the brilliant wit of Noël Coward with the intricate plotting of Agatha Christie? Set during a weekend in an English country manor in 1932, Death by Design is a delightful and mysterious “mash-up” of two of the greatest English writers of all time.

Edward Bennett, a playwright, and his wife, Sorel Bennett, an actress, flee London and head to Cookham after a disastrous opening night. But various guests arrive unexpectedly – a conservative politician, a fiery socialist, a nearsighted ingénue, a zany modern dancer – each with a long-held secret. When one of the guests is murdered, it’s left to Bridgit, the feisty Irish maid with a macabre interest in homicide, to solve the crime.

Death by Design is more than homage – it’s a new classic.
REVIEWS:

"Death by Design is a wonderful new comedy, peopled with vivid, fascinating characters. It merges wit, sophistication and even pratfalls into a medley of humor and fun. Playwright Rob Urbinati must have had as much fun writing this comedy as the audience has in savoring it."

"The play is called Death by Design, but don’t expect it to unlock the mystery to designing the perfect murder, unless the weapon of choice is laughter. Playwright Rob Urbinati has designed a recipe for fun that’s perfect for livening up the dead of winter: Combine one part murder, two parts mayhem, and season with a hearty dose of clever wit […] Think Noël Coward meets Agatha Christie, and you’ll have some idea what to expect. Both served as inspiration for Death by Design. The result is a smart play, masquerading as an all-out farce. Death by Design is chock-full of puns, one-liners, off-the-wall references and keen jokes that one viewing alone could never fully glean all its comic gems."

"These characters have some great lines to deliver, particularly (of course) playwright Edward, in whose mouth the snarky urbanities are like whiskeyed butter. Playwright Urbinati gives him and the others a fun array of verbal flourishes - rhymed character names are an ongoing gag - and the conversation takes some entertaining digs at theater itself, as well as the archetypes of the British class system. And oh, yes, the murder. Of course it's less a mortal emergency than a vehicle for everyone's lampoonery, especially once they've drained the brandy and moved on to gin."