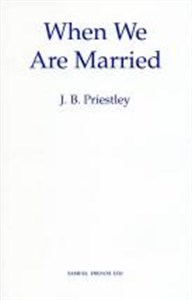 When We Are Married

Twenty-five years ago, the Helliwells, the Parkers and the Soppitts were married on the same day by the same person.

The young organist of the village church is courting Nancy, the niece of Alderman Helliwell who doesn't think very much of the companionship. With two other leading citizens and churchgoers he calls the young man, Gerald, to his home to warn him that playing the organ is all that is required of him.

It is with some glee that the organist informs them that he has discovered the parson was not qualified to marry couples and consequently the village's three staunchest and most respected couples are not married at all. The effect of the announcement is cataclysmic. Before things are settled, lives have been jarred amusingly and smugness has given way to hilarious adventure.


Premiere Production: When We Are Married was first performed at the St. Martin's Theatre, London, on October 11th, 1938.