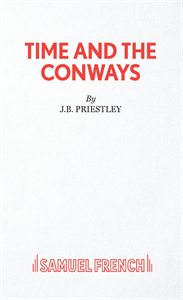 Time and the Conways

The Conways are having a party to celebrate Kay's twenty-first birthday.


The Conways are having a party to celebrate Kay's twenty-first birthday. Kay hopes to be a novelist. Hazel, the beauty, anticipates a romantic marriage. Madge wants to reform the world and marry the dashing young family lawyer, Carol, the baby of the family, spreads good cheer while Robin, back from war, is certain to have a good career. Alan is content to be an armchair philosopher. The nitwit mother has high hopes for them all.

At the party, Kay, with frightening clarity, sees her family twenty years in the future. They are petty, mean, and unfulfilled. Only Kay and her calm brother realize time is relative and there is something fine and worthwhile beyond.