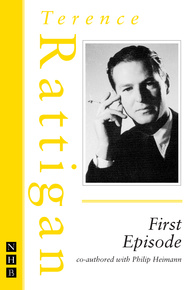 Terence Rattigan's first play, published for the first time in this edition to mark the centenary of his birth.

Terence Rattigan's first play, published for the first time in this edition to mark the centenary of his birth.
Written with his fellow student, Philip Heimann, while they were both at Oxford, First Episode shows an infatuated undergraduate, Tony, falling for Margot, an actress ten years his senior. And vice versa. Completing a triangle of rival affections is Tony's best friend, David.
Originally staged at a small experimental theatre in Kew in 1933, First Episode transferred to the West End and then to New York. Rattigan was twenty-two years old. Though not revived since then, it is a candidate – with its cast of eight – for rediscovery, much as was the now-feted After the Dance.
REVIEWS:

"Paints a fascinating picture of a vanished student world... Rattigan writes with great perception... shows that, even at 22, [Rattigan] was a born dramatist."

"An astonishingly precocious work that displays youthful charm as well as sensitively exploring themes of unequal (if not unrequited) love and repressed emotion that became Rattigan trademarks."