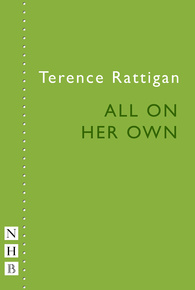 All On Her Own


Published in volume Harlequinade & All On Her Own

A powerfully atmospheric one-woman play, All On Her Own tells the story of Rosemary who, alone at midnight in London, has a secret burden to share that is both heartbreaking and sinister.
The play began life as a piece for television, broadcast on BBC2 on 25 September 1968. It was first performed on stage at the Overground Theatre, Kingston, Surrey, in October 1974.
A later version of the play, to which Rattigan gave the title Duologue, is also available.