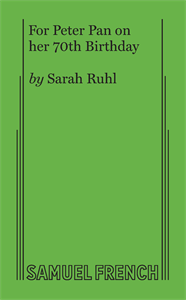 For Peter Pan on her 70th Birthday

A loving look at a family's view of death, life, and the allure of never growing up.


When Ann thinks of her father, she immediately remembers playing Peter Pan in her hometown theater in Iowa, particularly when he used to bring her flowers after her performance. Her memory is jogged by the fact that she and her four siblings are in their father's hospital room during his final moments. His death sparks a conversational wake that includes everything from arguments over politics to when each sibling realized that they grew up.
A loving look at a family's view of death, life, and the allure of never growing up.
REVIEWS:

"There is an intrinsic lyricism to Ruhl's ideas as well as her language in this work [...] Ruhl's writing also gives voice to a binding love between siblings that overcomes conflicting beliefs."

"A work that is equal parts dark and light, recalling the ebullient excitement of youth, but also confronting the hard fact of mortality [...] Ruhl's imagination is among the most adventurous at play today in the theater."

"Sarah Ruhl imbues the fantastical with a singular logic that is only hers but becomes yours during the course of the evening. She gives a map to a kind of preternatural joy; only when the curtain comes down do you remember that we cannot fly, time travel, or conjure our departed loved ones."

"Having For Peter Pan on her 70th Birthday to transport me back to my childhood now that 'no one is standing sentry between (me) and death' is a gift for which I lack adequate words to thank the playwright who wrote it for me."