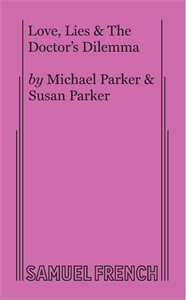 
Joan Scheller lives with the great love of her life, Sandy. In an effort to hide their relationship from her overbearing sister-in-law, the former movie star Olivia St. Claire, she introduces him as her psychiatrist.

One little white lie leads to another. Before long, Vinny the Enforcer, a quintessential Italian mobster, masquerades as her security guard, while her son, Chris, is forced to wear a dress and become her daughter Christina. Further complications occur when her new neighbor, Rachael, whose life appears to be a series of catastrophes, creates chaos and confusions wherever she goes. "The Doctor" is in.

Has Joan created a monster? Everyone wants a session. Olivia wants to discuss her love life, Rachael wants to know why she's such a disaster, and Vinny wants to discuss his work as an "Enforcer." Sandy is forced to listen and give misguided advice, which, to everyone's surprise, seems to work.

But what about love? Of course there's Joan and Sandy, if they can survive Joan's white lies; then there's Rachael, who is strongly attracted to Chris, if he can survive her mayhem. Finally, there's Olivia, who hires Vinny away from the mob to be her personal security guard (With benefits?).
REVIEWS:

"It is a hit! The response has been 100% positive. Patrons have come back to see the show again, bringing their friends with them."

Premiere Production: Love, Lies, and the Doctor's Dilemma premiered at Ed Fletcher's Early Bird Dinner Theatre in Clearwater, Fl in May 2016 under the direction of Toby Manion.