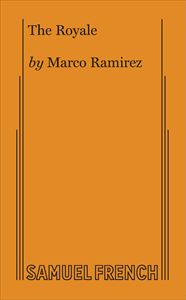 "Extraordinarily efficient! That this production never deploys real physical blows in recreating life in the ring is by no means to say that it doesn't pack a punch."


Jay "The Sport" Jackson dreams of being the undisputed heavyweight champion of the world. But it's 1905, and in the racially segregated world of boxing, his chances are as good as knocked out. When a crooked boxing promoter hatches a plan for "the fight of the century," "The Sport" just might land a place in the ring with the reigning white heavyweight champion.

Through the sights and sounds of the early 20th century boxing circuit, The Royale examines society's relationship with our present-day cultural heroes and the responsibilities that are thrust upon them when they find themselves outside of the ropes. Loosely based on real events, The Royale brings to explosive life the ultimate fight for a place in history.
REVIEWS:

"Ramirez avoids cliches, preferring to delve deep into his leading character's psyche and probe such complex questions as whether breaking down barriers or smashing glass ceilings can be almost an accident, and, either way, something not worth the personal cost."

"[...] a well constructed drama that captures both the beautiful frenzy of boxing and the (sadly still relevant) volatile state of race relations in America."

"Extraordinarily efficient! That this production never deploys real physical blows in recreating life in the ring is by no means to say that it doesn't pack a punch."

"[The Royale's] lively manner of telling reanimates this breakthrough saga for a new generation."

"The play is a stylized, blazingly theatrical triumph that keeps audience members on the edge of their seats."

Premiere Production: The Royale premiered at Center Theatre Group in Los Angeles, CA in April 2013, under the direction of Daniel Aukin.