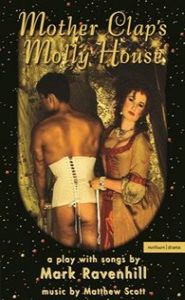 
It's London 1726, and Mrs. Tull's got problems. The whores are giving her a hard time, a man in a dress is looking for a job, her husband has a roving eye and the apprentice boy keeps disappearing for "a wander." Meanwhile in 2001, a group of wealthy gay men are preparing for a raunchy party.

Mother Clap's Molly House, a black comedy with songs is a celebration of the diversity of human sexuality, an exploration of our need to form families and a fascinating insight into a hidden chapter in London's history.
Note: There is a mandatory music fee for this title. Please contact our office for more information.
REVIEWS:

"Ravenhill's writing is tough, eloquent, sardonic, with some of the barbed formality of the Restoration style, which gets brutally peeled off in the present-day scenes. This is not a play you 'enjoy.' This is not a gay play either... The message of this play is not 'Come out,' but 'Come in.'"

"Mark Ravenhill clearly likes to have it both ways. In this wonderfully exuberant new musical play, he celebrates Sodom like there's no Gomorrah... Delicate souls may be offended but there is no doubting the sincerity of Ravenhill's assault on the transformation of sex into a dirty business."

"A theatrical manifesto for sexual tolerance that teeters wildly between the politics of Bertolt Brecht and the in-your-face deviancy of a gay nightclub... Ravenhill combines graphic sex with a generosity of spirit."

"In this wonderfully exurberant new musical play at the Lyttelton, he celebrates Sodom like there's no Gamorrah. But the satirist in him also attacks the commodification of sex and the resultant loss of love. The result is an evening rich in rudery and ambivalence."

"...there's something richly moving about witnessing the aesthetic coming-of-age of Shopping and Fucking scribe Ravenhill, whose newplay evinces less interest in shock value per se than in showing an unexpected tenderness toward characters who are themselves struggling toward love."

"This play seems a little gentler and funnier than Ravenhill's previous work although his trademark buggery scene still makes an appearance. He treats his characters with more affection and, at times, the playis reminiscent of the work of Jonathan Harvey."

Premiere Production: Premiered at the Lyttelton Theatre, part of the Royal National Theatre, in September 2001.