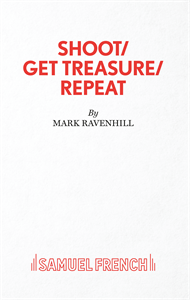 Shoot/Get Treasure/Repeat is Mark Ravenhill's epic cycle of plays exploring the personal and political effect of war on modern life, produced in various locations around London in April 2008.


Shoot/Get Treasure/Repeat is an epic cycle of plays exploring the personal and political effect of war on modern life. The plays that make up Shoot/Get Treasure/Repeat began life at the 2007 Edinburgh Festival Fringe as Ravenhill for Breakfast (produced by Paines Plough), winning a Fringe Fest award, and the Jack Tinker Spirit of the Fringe award. They form a collage of very different scenes, with each taking its title from a classic work. The plays were presented in April 2008 in various venues across London, from Notting Hill to a Victorian warehouse in Shoreditch, via Sloane Square and the South Bank.
REVIEWS:

"Ravenhill writes tales that hold a gun to your heart and shoot you in the soul, but leave you alive so you can feel every last drop of pain."

"Here Ravenhill catches the still sad voice of humanity. It is a far greater achievement than trotting out stale, self-loathing liberal platitudes."

"Ravenhill originally earned notoriety on the shock-and-sperm theatre-scene of the '90s with Shopping and Fucking, which was co-produced by Out of Joint and the Royal Court in 1996. Since then, he's been a prolific and ever-provocative presence, in playwriting and journalism."

Shoot/Get Treasure/Repeat was originally developed in association with the National Theatre Studio and Paines Plough. First produced as Ravenhill for Breakfast at the Traverse Theatre, Edinburgh in August 2007 by Paines Plough.