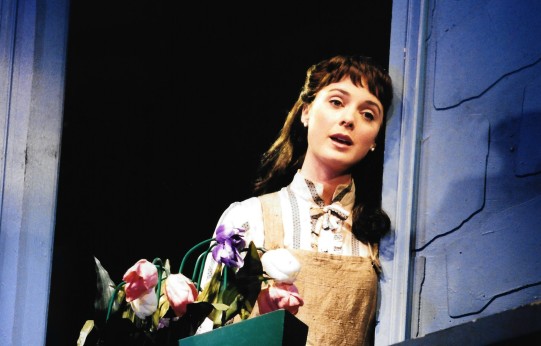 Set in Paris shortly after World War II, Amour concerns the meek and unassuming Dusoleil, a beleaguered clerk who secretly pines for the lovely but unhappily married Isabelle. When Dusoleil inexplicably develops the ability to walk through walls, he becomes a Parisian Robin Hood, stealing from the rich and giving to the poor. Word of the infamous thief spreads, intriguing Isabelle in particular, and shy Dusoleil faces a morel dilemma -- will he continue his righteous campaign, or come clean and rescue Isabelle from her unhappiness?
Amour was adapted from the 1943 short story Le Passe-Muraille by Marcel Aymé. The story is memorialized by a statue in Montmartre in Paris.
The show is through-composed and contains no dialogue between musical number.

We are in Paris, in Montmartre, shortly after the second world war. It is morning. Our hero, whom we'll call Monsieur Dusoleil, is on his way to work (Opening). He is an ordinary civil servant, but very committed to his humdrum job, much more so than his rather grumpy colleagues (Office Life). Dusoleil's unexciting life, however, is periodically irradiated by his beautiful neighbor, Isabelle. He lives for a glimpse of her. As he returns from work, we see her cross the square (Dusoleil Leaves the Office). Unbeknownst to him, and despite her respectable marriage to a court official, her life is as banal and lonely as Dusoleil's own. She is addicted to novels and magazines, and dreams of romance and intrigue (Other People's Stories). As evening falls we meet the other habitués of the square: a painter; a whore; a news vendor; and the Prosecutor, Isabelle's husband, with two policemen in his pay (Street Vendors' Waltz).

On his way up the stars Dusoleil curses at yet another power outage, a symptom of postwar austerity. When the lights come back on, he, to his astonishment, is not outside his flat, but in it (Dusoleil Walks Through the Wall). Where has he acquired this mysterious gift of being able to pass through solid walls? He solicits medical attention (The Doctor's Song). Clutching the pills the Doctor has prescribed, he returns home, choosing to ignore his newfound powers. His life may not be spectacular, but at least it's familiar (An Ordinary Guy). The next day, however, he is grossly insulted by his new boss and uses his gifts to wreck glorious vengeance (Dusoleil Insulted/Revenge).

Meanwhile, Isabelle is sad and lonely (Somebody). Her plight is ignored by an uncaring husband who has his own private pleasures (Prosecutor's Song). Dusoleil now decides to use his powers to do good. Under the nom de crime of Passepartout, he begins his Robin Hood campaign by making a gift of diamonds to a rather dejected whore who is failing to attract the business she did during the war (The Whore's Lament/Monsieur Passepartout). Dusoleil may be able to walk through walls, but he still lacks the courage to declare himself to Isabelle. She, however, has turned her fantasies towards this Passepartout, her new hero (Isabelle's Song). The Painter notices his secret passion and warns him against acting on it. Nevertheless, Dusoleil hatches a plan. He will break into the deepest vault of the Banque de Paris and set off the alarm, causing himself to get caught in flagrante. How will Isabelle be able to resists? (Act One Finale/Java of the Latest News).
In jail Dusoleil waits for Isabelle to visit him. The attention he actually attracts -- from two of his female work mates -- is much less welcome (Dusoleil in Jail). Disgruntled, he walks through the wall and out of prison. Back in the square, he reveals himself to Isabelle (Street Painter's Song/Isbelle on Her Balcony). When she says she cannot leave her husband, Dusoleil decides to face up to his destiny and to stand trial for his crimes.

We are now in court (Transformation). Dusoleil is represented by a nervous young lawyer, his only protection against the wrath of Isabelle's husband, the Public Prosecutor (The Lawyer's Plea/Summing Up). The somewhat bizarre proceedings are interrupted by the appearance of Isabelle. She has an astonishing revelation: her husband was a Nazi collaborator in the war. He should be on trial, no Dusoleil. Dusoleil explains that everything he did, he did for love (Duet for Dusoleil & Isabelle). And, this being France, he is pardoned. However, just as he is about to follow Isabelle home, he loses his nerve. The entreaties of the company, nonetheless, prevail, and our two lovers spend a night of passion together (Whistling Ballet/Amour).

The next morning Dusoleil is awakened by the world press, all keen for him to display his powers for the cameras. He has a hangover -- from love, from champagne, from everything. Looking for some aspirin, he finds the pills the doctor gave him (Love's Hangover). They provide the cure -- not for his headache, but for his ability to walk through walls. As the pills take effect, Dusoleil is caught mid-lead and becomes stuck fast in a wall. One by one his friends arrive, and, led by Isabelle, the company laments what might have been (Serenade).

Nevertheless, far from being an ordinary man, Dusoleil is remembered in song and fable. And to this day there is a statue in Montmartre of Le Passe-Mauraille, the man who could walk through walls.

And that is the only part of this story which is true...


Premiere Production: Amour opened on Broadway at the Music Box Theatre in 2002, starring Malcolm Gets and Dusoleil and Melissa Errico as Isabelle.