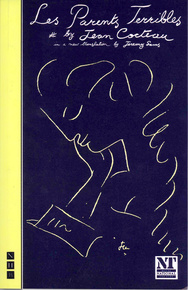 
Written in eight opium-sodden days, Jean Cocteau's Les Parents Terribles is a frank, ironic, bruisingly melodramatic play dealing with incest and the diseased love from which it stems.

The play was first performed at the Théâtre des Ambassadeurs, Paris, in November 1938. Its run was soon terminated amid accusations of immorality, and the production was transferred to the Théâtre des Bouffes-Parisiens in January 1939, where it continued until the outbreak of World War II.

This English version by Jeremy Sams was first performed at the National Theatre, London, in 1994, directed by Sean Mathias.

This edition of the play includes an introduction by Simon Callow.
REVIEWS:

"Cocteau's wonderfully observed tragic-farce may not shock the way it first did in 1938, but in Jeremy Sams' translation it still sparkles."

"Jean Cocteau wrote Les Parents Terribles in eight days at the start of 1938, bingeing on opium as he did so. It shows, for this comedy of sexual confusions is feverish and surreal. Presented here in the fine translation by Jeremy Sams."

"The play's oddity is that it starts all Cowardy-custard, full of laughs as Yvonne emotes over the horror of her son finding a girlfriend ("Did I give birth to you for this?"). Then abruptly we are tipped into an Iris Murdoch world of incestuous discomfort and cruel blackmail as George and Leo sabotage the young, regret it, and it turns lethal."