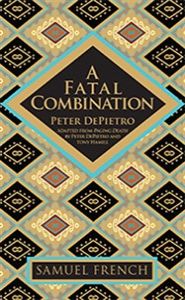 
A flamboyant, aging and lovable Greek art dealer, a reticent and revengeful librarian, a not so shallow bleached blonde actress, and a literary scholar all descend upon a posh Boston hotel to retrieve a rare Byzantine treasure secured in the hotel vault where it awaits an upcoming museum exhibition.

Each wants the treasure enough to kill for it. George and Margaret Manning, a sharp eyed husband and wife detective team skin to Charlie Chan and Number One Son, work hand in hand to solve this deliciously sinister plot of international intrigue. Margaret gets in the way of the calculating killer and becomes the fourth and final victim. This is a thriller to the end.
REVIEWS:

"[The audience], at times, hurled suspicious accusations at one another with the vigor and purpose of discus throwers at a championship meet... A dramatic resolution."

Premiere Production: A Fatal Combination was first performed at the Parket House Hotel in Boston, Massachusetts on January 24, 1986. Directed by Peter DePietro.