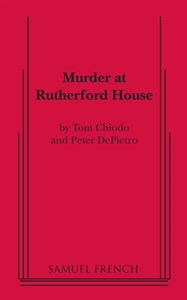 A party game for people in search of more spice in their entrees.

It is the fifth anniversary of the death of Lord Rutherford. Lady Rutherford is throwing her annual dinner in commemoration of the event-- to which you are cordially invited.
On arrival you are given a character name and a dossier explaining your background and connection to the Rutherford family. Over cocktails, you mingle with the other guests, spotting the Baroness von Keepsemfrumfloppen and figuring she's an actress, but what about all these other people? Suddenly, there's a gunshot resulting in the evening's first corpse. The body is removed and you sit down to dinner.
A detective reveals himself and begins the investigation. What have you observed so far? Have you a clue to the killer? Clues seem to be everywhere, but which ones count and which are red herrings? Ultimately, there is a parade of suspects. You may question them. Perhaps you ask just the right question at the right time and unmask the murderer. Perhaps you ask the wrong question and become the prime suspect!
You begin to wonder: will you survive till the coffee and cordials are served? In the end, all is revealed and justice prevails. The Silver Sleuth Award is given to the guest who best explained the who, why and how dunit of the murder at Rutherford House.
REVIEWS:

Like a life sized game of Clue.... Wonderfully enjoyable.

A party game for people in search of more spice in their entrees.

As campy as a Boy Scout Jamboree, but a lot more fun.