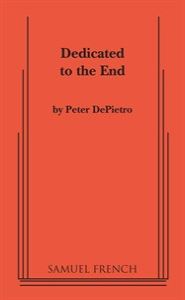 Dedicated to the End

Congressman Richfield is giving his acceptance speech on the eve of his election as Governor of New York when bullets start to fly.

Congressman Richfield is giving his acceptance speech on the eve of his election as Governor of New York when bullets start to fly. The intended victim is missed, but not for long.

His wild, irresponsible son stages his own kidnapping and a madame, turned FBI informant, is killed because she knows too much. When a bitter female reporter uncovers organized crime links in the Governor elect's background, the audience i sure it's on to the killer. But then the diary notes and possible love interests surface. Who could it be? Certainly nor Ms. Pinkbottom, the punctilious, loyal secretary to Mr. Richfield!

A tough nosed detective dressed undercover in female garb tips his wig and takes over an investigation that is comical chaos at its best.
REVIEWS:

"You're consumed by the mystery. The whole world could have collapsed around us and we'd still be chasing the killer. After the resolution, the performers got a standing ovation."

Premiere Production: Dedicated to the End was first performed at the Henrietta Marriott Hotel in Rochester, New York on February 28, 1986. Directed by Peter DePietro.