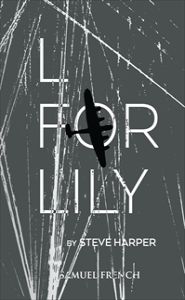 All seven of her crew have their own fears and anxieties. Can Skipper the pilot complete the raid and get his crew safely home? The crew: Eric the nose gunner wants to end the war with a profit. Norman the flight engineer dreams of using his basic flight training to fly Lily home on a "wing and a prayer". Joe the radio operator has been recommended for officer training, and worries about the youth and inexperience of his fellow crewmen. Arthur is just out of flight training, and this is his first mission. Taff is the mid-upper gunner. He may appear to be the clown of the crew, but there is a bit more to Taff than that. Finally, there is Tony in the rear turret with his movie-star good looks. Tony has a lot on his mind, he is in trouble, and he can't even tell his friends why.

So apart from that, the flack and the Luftwaffe, everything should be "Tickety Boo." Bon Chance Lily.


Premiere Production: L for Lily was presented at the Princess Theatre, Hunstanston, on Friday, 10th July, 2015.