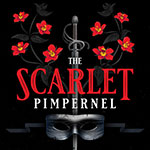 THE SCARLET PIMPERNEL is an action/adventure show based on Baroness Orczy’s famous 20th-century novel about the French Revolution: the battle for Liberty, Equality and Fraternity. The book and lyrics by Nan Knighton are at times funny and at others horrifying. Frank Wildhorn’s music is moving and passionate. This show is a terrific way to learn about 18th-century French and British history.

Paris. May of 1794. At the bloody peak of the French Revolution, the beautiful actress, Marguerite St. Just, falls in love with an Englishman, Sir Percival Blakeney. After a whirlwind courtship, she announces her engagement to Percy during her farewell performance at the Comedie Francaise (Storybook). Chauvelin, a high-ranking revolutionary official and Marguerite’s former lover, is furious. On the night Marguerite leaves for England with Percy and her brother, Armand, Chauvelin blackmails her into delivering him secret information about the Marquis de St. Cyr, a friend of Percy’s whom Chauvelin promises will not be harmed. But in no time, Chauvelin uses this information to trap St. Cyr, and oversees his death by guillotine, along with his family and scores of other innocent Frenchmen (Madame Guillotine).
In England, Percy and Marguerite are married (You Are My Home), but Percy’s happiness is abruptly dashed when he learns his new bride was responsible for the death of his friend, St. Cyr. He has apparently married a French spy, and sending a confused Marguerite off to bed alone on their wedding night, Percy sings of his heartbreak (Prayer).
Determined to somehow right the wrong his wife has done, Percy gathers his friends around him and persuades them to join him in a “private war” against the inhumanities of the bloody French regime. They will call themselves The League of the Scarlet Pimpernel and work through disguise and diversion to save as many innocent lives as they can. Boarding a schooner to sail to France, Percy and his men fight back their fears (Into The Fire). By early July, Percy (a.k.a. The Scarlet Pimpernel) has managed with his men to pull off one clever rescue after another, and Chauvelin responds with a fiery determination to catch this mysterious Pimpernel (Falcon In The Dive).
Back in England, Percy and his men have now become virtual caricatures of their dandified, foppish selves in order to deflect suspicion from their heroic activities in France. Continuing his “fop act,” Percy entertains one and all as they speculate about the identity of their new British hero (The Scarlet Pimpernel). Marguerite has no idea why Percy has become so distant and inane, and their marital estrangement is a source of constant pain for her (When I Look At You).
Chauvelin arrives in England and pays a visit to Marguerite. He asks her to work with him again and help discover the identity of The Scarlet Pimpernel. She angrily refuses, but realizing that Marguerite is unhappy in her marriage, Chauvelin tries to win her to his side, reminding her of the passions they shared early in the revolution. (Where’s The Girl?) Marguerite sends Chauvelin away, determined to never fall into his clutches again. As for Percy, although he now regards his wife as a stranger – a woman not to be trusted – he continues to secretly love her.
Percy and his men are summoned to the Royal Palace by the Prince of Wales, who suspects they may have something to do with the League of the Scarlet Pimpernel. They are able to persuade the Prince, however, that their frequent trips to France are merely to buy frills and frou-frou. After all, their only duty as men is to “uphold the banner of beauty” (The Creation of Man). Meanwhile, Chauvelin meets secretly with Marguerite, informing her that her beloved brother, Armand, has been arrested in Paris as a member of the Pimpernel’s League. He insists she spy for him at the Royal Ball that night. If she fails to come up with information about the Pimpernel, Armand will be guillotined. Marguerite, Chauvelin and Percy eye one another warily, as all three wonder who exactly can be trusted in this slippery world (The Riddle).
That night, at the Royal Ball, Percy continues his public disguise as England’s greatest fool, joking about the elusive Pimpernel and mocking the stony-faced Chauvelin (They Seek Him Here). Undeterred, Chauvelin commands Marguerite to uncover the identity of the Pimpernel, and she persuades one of Percy’s men to have the Pimpernel meet her outside on the footbridge. When Percy arrives, disguising his voice and keeping in the shadows, Marguerite confesses her sins to the Scarlet Pimpernel: yes, she has tried to expose him and, yes, she has spied, but it all has stemmed from Chauvelin’s coercion and blackmail. She warns the Pimpernel to run from Chauvelin, and begs him to help her save her brother. Percy sends his wife away, and releases his great joy at discovering that she has only been an innocent victim. All along she has been the same woman with whom he fell in love (She Was There).
Percy instantly sets off for France with his men to try to save Armand, but Marguerite also secretly travels to Paris. Disguising herself as a French tart, she tries to cajole information about her imprisoned brother from two soldiers. Chauvelin, however, is nearby, and instantly seeing through her disguise, he orders both Armand and Marguerite to be sentenced to the guillotine. Embittered at his realization that Marguerite will never return his love, Chauvelin finally drives her out of his heart (Where’s The Girl (Reprise)).
In prison, Marguerite tries hard not to think of Percy (I’ll Forget You). She prepares to meet her death, but Chauvelin has a subtler torture in mind. Resolved to catch the Pimpernel, he allows Marguerite and Armand to escape and sets a trap for all of them. As everyone converges on stage at the now abandoned Comedie Francaise, Marguerite finally learns that the Scarlet Pimpernel is none other than her own husband, Percy. Percy and Chauvelin confront each other in the ultimate swordfight and showdown, and although Percy seems certainly doomed to death, he manages to outwit Chauvelin one last time. Finally, Percy and Marguerite are reunited (When I Look At You (Reprise)) and able to trust one another. Full Company joins in to celebrate this triumph of the human spirit (Into The Fire(Reprise)).


Premiere Production: The Scarlet Pimpernel played on Broadway in a progressive series of three different versions for a total of 722 performances at the Minskoff and Neil Simon Theatres starring Christine Andreas, Terrence Mann and Douglas Sills. The third and final version was authorized to be made available for our customers.