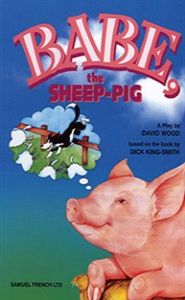 "The show is absolutely enchanting. It's aimed at kids but the drama, the tension, the humour, the lovable heroes and menacing villains, make it compelling theatre for grown-ups too... a cracking good story, beautifully adapted for the stage"


The tale of high adventure in the farmyard that became the hit movie Babe is a captivating play for children young and old.

A leading writer of children's plays brings the heartwarming story of the piglet who rises to fame at the Grand Challenge Sheep Dog Trials to the stage in a dramatization that allows for flexible casting.
REVIEWS:

"There comes a happy point in children's theatre when one can almost forget the word 'children's' and declare: This is real theatre, with an appeal to all, from infant to octogenarian, in whom a sense of wonder and a bright imagination are alive and well. So it is in David Wood's adaptation..."

"The show is absolutely enchanting. It's aimed at kids but the drama, the tension, the humour, the loveable heroes and menacing villains, make it compelling theatre for grown-ups too... a crackling good story, beautifully adapted for the stage."

"What marvellous theatre... As for the denouement -- well, children applauding for Babe for driving the sheep through the trial gate is just terrific theatre... First class."

"When a packed theatre is chanting the lead character's name at the end of the production, it's fair to assume you've got a hit on your hands. So it was with Babe, The Sheep Pig as the hundreds of young children (and a few adults) acclaimed a masterful adaptation... A delight."

"David Wood's script is the real star... The kids in the audience revelled in the slapstick... Everyone got involved when Fly beseeched the crowd to recall a password to help Babe... This production should inspire many more across the country."

Premiere Production: Babe, The Sheep Pig was first performed in 1997-8 by Whirligig Theatre at the New Victoria Theatre, Woking and on a nantionwide No. 1 UK tour, in association with the Manchester Library Theatre Company and the Birmingham Hippodrome. The tour was made possible by Barclays Stage Partnership, a sponsorship scheme from Barclays Bank and the Arts Council of England.