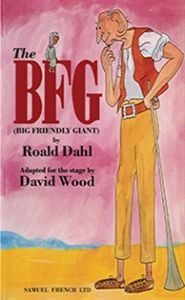 
Roald Dahl's classic book about the 24-feet-high Big Friendly Giant and a little orphan called Sophie brings to the stage some of Dahl's most memorable characters.

The BFG and Sophie team up to save the children of England from the child-eating giants, Bloodbottler, Fleshlumpeater, Bonecruncher, Meatdripper, Childchewer, and Gizzardgulper. They are assisted by the Queen of England and the Heads of the Army and Airforce with their helicopters. Locations include the BFG's cave in Giant Country, Dream Country and Buckingham Palace.
REVIEWS:

"Any child not delighted by The BFG must have a head filled with squashed flies and deserves to be fed for a year on disgustatious snozzcumbers."

"Like most David Wood shows, this will thrill the kids without boring the adults. I'd be bogswinkled if I didn't admit it is quite scrumdiddlyumptious."

"The BFG presents an awesome challenge which the children's dramatist meets with his customary panache... The chiddlers in the audience seemed genuinely enthralled -- and it certainly makes a change from the telebunkum box."